Advice for those starting the Caminho Portuguese 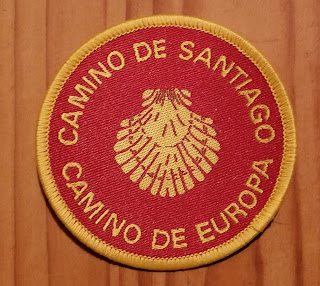 While the Caminho Portuguese bears many similarities to the Camino Frances and other routes on the Way of St. James (shells, yellow arrows, signage, and albergues) it is also profoundly different.

For example, while pilgrims on the Camino Frances are familiar with many of the key landmarks (geographic, cultural, historical, and religious) such as crossing the Pyrenees, the monument of the Pilgrims on the Sierra Perdon, crossing the Meseta, visiting the site of the Cruz de Ferro, admiring the Burgos Cathedral, and climbing O'Cebreiro.  By comparison while the Caminho Portuguese crosses by many beautiful historical, cultural and religious landmarks the trail seems more defined by the major urban areas along the route such as Lisbon, Santarem, Tomar, Coimbra,  Porto, and Valenca/Tui on the Spanish border.

Perhaps the largest difference most people notice when planning and setting out on the Caminho Portuguese from Lisbon are the larger distances during the first 3-5 days.  Many of the online and published itineraries of the route starting in Lisbon indicate that the first several days on the way of St. James are in excess of 30 km long per day.  While these distances aren't impossible to trek, there is no denying that that they make the outset of anyone's hike much more challenging and tiring.  Add to this distance the fact that constant trekking on hard surfaces like ash-vault, concrete, tile and cobble stones which all have an odd way of beating up your body.  If you thought the climb over the Pyrenees or into O’Cebrerio were  physically challenging, then the relatively level but tough streets of the Caminho Portuguese have another type of challenge in store for you.  Even those hardened hikers in our group found that the daily beating seemed to repeatedly bruise the bottoms of their feet. Because of this we would recommend taking setting a slower pace at the outset of the Caminho Portuguese.  Especially since, despite reports there are amenities which exist and which are being developed in these early sections which provide easy means to cut the length of these days down.

For all of these reasons, and all of the practical ones, we would highly recommend that pilgrims have good shoes or hiking boots which are broken in before setting out on the Way.  I prefer and have used Keen Boots for years - on the Bruce Trail, Camino Frances, Via Podiensis, East Coast Trail, etc.. - and never had a problem with my feet.  In comparison Sean wears Merrell Moab shoes which have a reputation for being wider and very comfortable.  Regardless of what you prefer make sure you have good, sturdy footwear that is broken in before you get on the trail and that you compliment your shoes with good hiking socks (Merino Wool is our material of choice).  As we have mentioned the Caminho Portuguese is a combination of roadways, highways, cobbled stone streets, sidewalks, hills, more hills, logging roads, hydro cuts, and cobbled stone streets, so you need to take care of your feet as they carry you across the route.

Our next piece of practical advice is to invest in, research, and perhaps even carry a good guide book or two.  Whether you have a pension for getting lost or like to plan the next few days in advance spending time with your Camino guidebook can be a huge help.  Moreover, the signage and listed distances along the Caminho Portuguese, much like their Spanish counterparts, can often be taken with a grain of salt.  Listed distances vary, and may not be precise.  Therefore we would definitely recommend either researching or carrying a good guide book along the route.  In our case we benefited from John Brierley's text on the Caminho Portuguese which we have found to have extensive information on not only the route and accommodations but also the history and culture of regions as well as the religious significance of various sites. 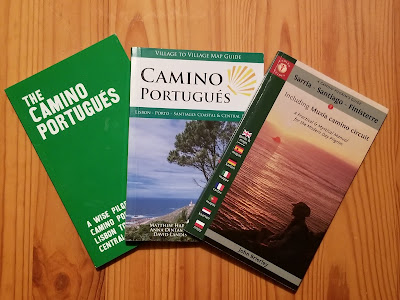 Our next piece of advice is to expect the unexpected.  We all plan and learn about the weather and conditions in the countries we are travelling in, and of course we have to be practical as none of us want to carry a huge backpack with everything in it.  But the realities are that the Caminho Portuguese generally traverses along the Atlantic coastline, this means that strong winds, cold air masses, an rain storms can move in quickly.  Now we have generally been lucky in terms of the weather on our treks on the Way of St. James, travelling either in the fall (September/October) or the spring (April/May).  Despite these choices it was often much warmer than historical weather averages suggested it would be.  So, our advice here is two fold. First, ensure you have the gear necessary to adjust to the weather.  For us that means that at all times we each carry a  lightweight fleece sweater, good rain gear (jacket and pants or poncho), and perhaps even a compact down jacket depending on the time of the year.  Second, that given recent spikes in heat and humidity across the world,  if you find hiking in extreme heat hard to manage then it is perhaps best to get up early in the morning to enjoy the wonderful sunrises, cool mornings, and peacefulness of the new day - which also enables you to be in the shade or at the albergue before the heat of the afternoon gets too extreme. 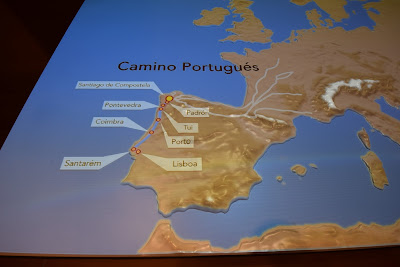 -      Portugal is all about Fatima and less about Santiago – the little blue arrows of the Fatima trail are one of your main indicators of your direction too – whether you are going with them or against them – if you get lost follow the little blue arrows and rest assured you are on your way
- along this line of thinking, if you have the time and opportunity, then chose to go to Fatima - from our experience far more people traverse Portugal en route to Fatima than Santiago, it is central to the nation's faith and culture and we wish that we had visited to understand better....

With all of that said, while hiking from Lisbon to Porto is certainly a different experience than we experienced on the Camino Frances in Spain, the trek from Porto to Santiago is very similar to our previous experiences on The Way in the past.  The beautiful city of Porto rather than Lisbon is the site where most pilgrims along the Caminho Portuguese begin their trek – and it is like a culture shock for those who started in Lisbon or before hand.  There are more pilgrims, more amenities, and of course all of this is accompanied by the reintroduction of the race for the bed each day, but also a more social atmosphere between pilgrims.

The Caminho Portuguese is an amazing experience and hopefully anyone who treks out onto it enjoys it for what it is - a route which has its own highlights and challenges different from the Camino Frances. 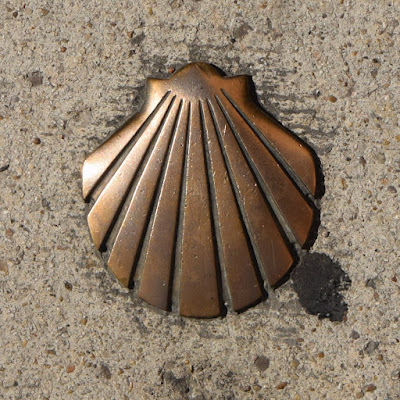 Welcome to Our Blog

This blog describes our walk along the Camino Portuguese in April and May 2019.   We hiked 690 km from Lisbon, Portgal to Santiago de Com...