Reflecting on the trek from Porto to Valcenca / Tui – 130 km 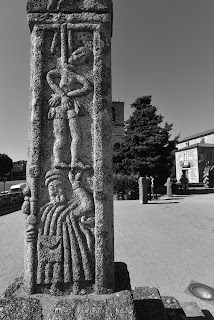 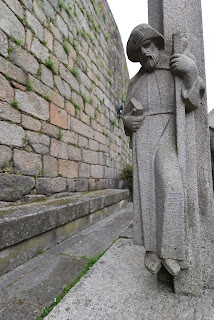 While the trek from Lisbon to Porto is substantially different than the Camino Frances in Spain, once you reach Porto things change both subtly and dramatically.

From Lisbon to Porto, as we have already noted, there are potentially longer distances between albergues, which means longer hiking distances per day, overall there are fewer pilgrim amenities, and vast sections of The Way are on harder surfaces such as cobblestone tracts , ash vault roadways, or tiled and concreted sidewalks. In short it is a tough way to start a hike.

From Porto onward however, much of this changes. 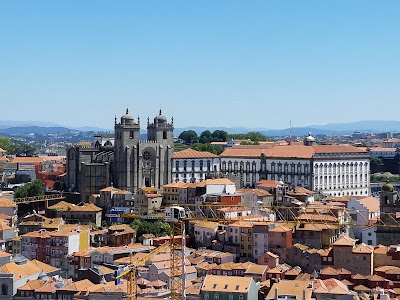 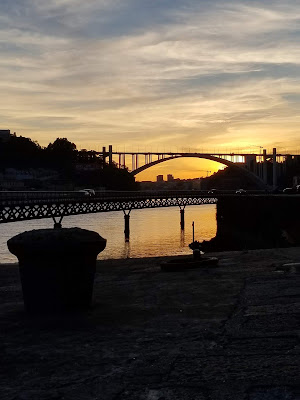 Simply put, if you loved the Camino Frances (I mean who doesn’t) and want more of the same, then this section will be to your liking – more yellow arrows, closer albergue stops, more rest stops with refreshments, and more pilgrim centered facilities. Admittedly those who begin in Porto might initially feel that this is misleading. However, the comment that there is less roadwalking in this section needs to be understood in the context of the route between Lisbon to Porto. Especially since much of the as the first two days out of Porto and out of Barcelos are akin to trekking through suburbs, and are likely a little shocking for pilgrims who are just joining the route. Indeed if I had to hike out of Porto again I would definitely trek along the Senda Litoral and then rejoin a day later to the Camino Central – which according to everyone who took that route was beautiful, relaxing, and easy trekking along a boardwalk. Regardless, once beyond the boundaries of Porto the Caminho Portuguese becomes an easier trek on more friendly pathways. 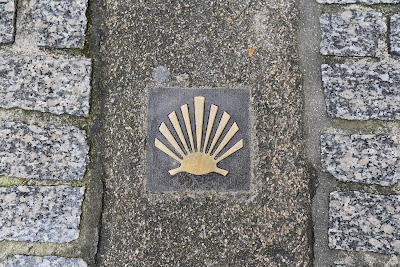 In terms of the cost of trekking on the Caminho Portuguese, we found that albergues were similar in price to those on the Camino Frances, while overall the food has generally been cheaper. However it is worth noting that in towns like Porto, Barcelos, Ponte de Lima and Valenca the prices are higher than we have experienced along the Portuguese Way – likely a reflection of being larger cities and tourist destinations. In addition, from Porto onward there also seems to be a higher expectation of services, amenities, assistance, food, wine, by pilgrims along this route than the stretch between Lisbon and Porto. 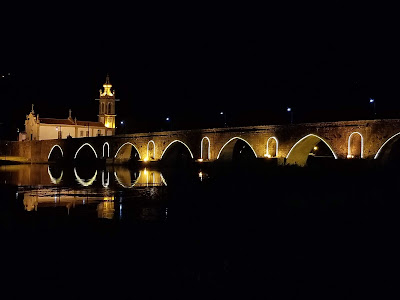 In terms of the number of pilgrims en route to Santiago along the Caminho Portuguese it must be understood that in no way are there the sheer volume of hikers on this route. As such, once again, things need to be understood in the context of the differences between the number of hikers between Lisbon and Porto and the relatively higher numbers of pilgrims which were evident after Porto and again after Tui. This means that from Porto onward most hikers will find themselves again part of a very clear community on a common pathway. While we found this also to be true from Lisbon onward, the sheer number of pilgrims, pilgrim amenities, and signage after Porto makes it clear that there are more people utilizing the route from this point forward. 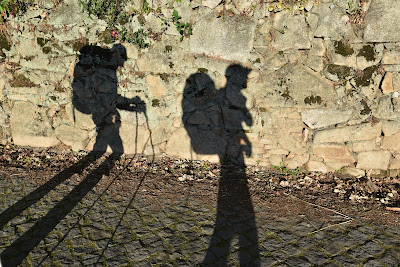 The Albergues throughout Portugal and Galacian Spain are very similar in style to those found on the Camino Frances – though the amenities are increasingly similar from Porto northward. Similarly finding albergues and beds after Porto becomes simpler with each day, as both the advertisements (similar to those found on the Camino Frances) and accommodations get more plentiful. With this said, despite the increase in the number of albergues, both they and donativos were regularly full in this stretch as we hiked through. Many seemed to have been reserved in advance by pilgrims, tour groups and groups travelling together which made things more challenging to assure that we found accommodations. This of course does not mean that there are no available accommodations as you trek through this stretch, because in addition to albergues, pilgrims also have a range of other options including hostels, Quintas, Casas, pensions/fondas, and of course hotels along the way.

*** Unnervingly another thing that began in this section was that almost every albergue owner, hostel owners, or pension owners began to take pictures of our passports and ask for our signatures on their phone. Some even demanded to take pictures of us and one asked to photograph my Mastercard and reverse of the card with the signature on it. Perhaps I am just nervous around technology, however much of this new tap and photograph system seemed to certainly lack any sense of security for our information. *** 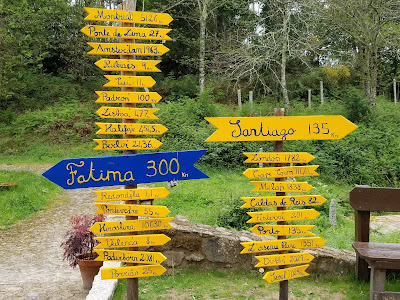 Another notable change to the Caminho Portuguese after Porto is the increase in the number of cafes, bars, and restaurants along the Way. More than the existence of these establishments it is the rapid increase in the number of advertisements for lunches, pilgrim menus, and Caminho stamps that makes you are aware that things have changed. Indeed, some establishments have simply put their stamp and an ink pad on a post outside to allow pilgrims to self stamp on the go. To this end, most bars also now have multi lingual signs and menus with images openly displayed.

Another feature of the Camino Frances to return after Porto was the surge of luggage transportation services and taxi services are all much more evident and more utilized by many pilgrims throughout this section. 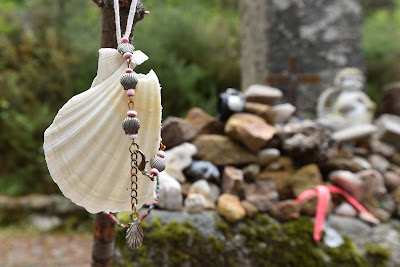 As noted in our previous post, the way marking of the trail throughout Portugal is amazing and comprehensive. Even from Lisbon onward there are waves of little yellow arrows, shells, and Caminho signage to help you north toward Santiago. In addition there are blue arrows pointed towards Fatima, which from Lisbon to Tomar point in the same direction and from Tomar until Santiago point in opposite directions. This means that the way marking on the Caminho Portuguese from Porto onward is just as comprehensive and familiar to those who have hiked on the Camino Franaces – yellow arrows, shells, GR blazes, Caminho signs, and crosses. As usual we found following the yellow arrows challenging in the larger cities when they were often put on the side of the curb along the edge of the road rather than on the walls or sidewalk itself. 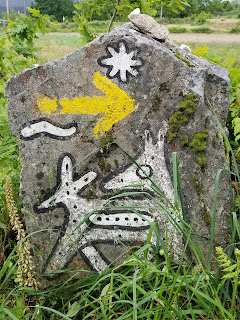 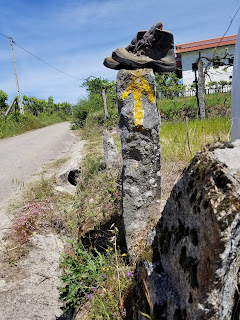 Need to pay attention as there are variations in the route you can take after Porto (Coastal, Central, Spritual, Litoral). While this might sound confusing in such areas there were almost always maps delineating each route out of the major cities. 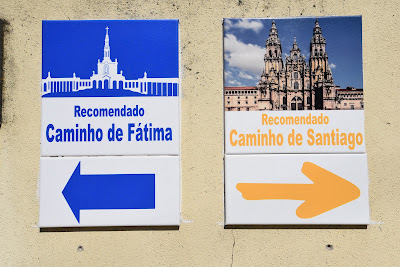 While the blue arrows are still around from Porto until Santiago, the emphasis on Fatima begins to disappear with the number of pilgrims heading southbound declining day by day. For those who get lost after Porto, remember that if you can locate a blue arrow then you can typically find your way back to the Caminho by walking in the opposite direction to them. 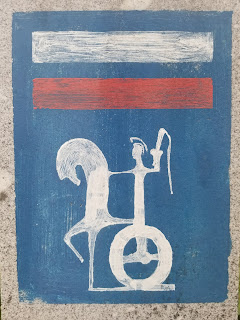 From Porto onward there are more big cities, more bar/cafes/restaurants, more albergues and accommodations, but with these things come more tourists and more tourist destinations and more crowds. As a result from Porto forward this means that you often spend more time negotiating around tour groups in cathedrals and cities, spend more nights in hotels or pensions rather than albergues and more time eating at restaurants rather than cooking. In addition to the increasing urbanization of the trail Porto is also the primary starting point for most pilgrims on the Caminho Portuguese. This means that on a trail which previously had a dozen or two dozen people on it you now have hundreds of new hikers. In response to this you also get the accompanying rise in advertisements, yellow arrows, luggage transport, taxi services, regional Camino mascots, and pilgrim tourist shops. In short, from Porto to Santiago the Camino Portuguese feels more like the Camino Frances. This is neither good nor bad, it is simply a noticeable difference. Perhaps the only downside of only hiking from Porto onward is that you spend so little time in Portugal compared to those who began their trek in Lisbon - which given the beauty of the landscape, generosity of the people and amazing food along the route is unfortunate to miss out on. 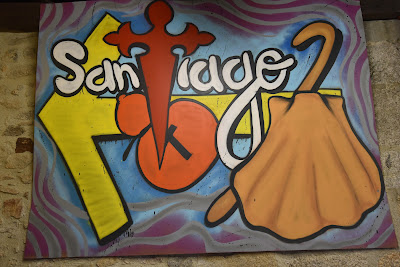