What is a Camino?

For those new to the idea, or for those simply curious a Camino is – in its most basic form – simply “to walk” or to hike along the path or “the way”.   However, in a historical, spiritual, and cultural sense, a Camino is a pilgrimage from one’s home to a destination of special significance. These days the most prevalent notion of “the Camino” refers to one of the many pathways which take hikers and pilgrims throughout Europe to the Cathedral in Santiago de Compostela.  Pathways on the road to Santiago can be found in Nordic Europe, Germany, Switzerland, France, England, Italy, England, Portugal and of course Spain.  Though the most popular and well known of these pathways is called the Camino Frances and traverses from St. Jean-Pied-de-Port in France across Spain to the shores of the Atlantic Ocean. 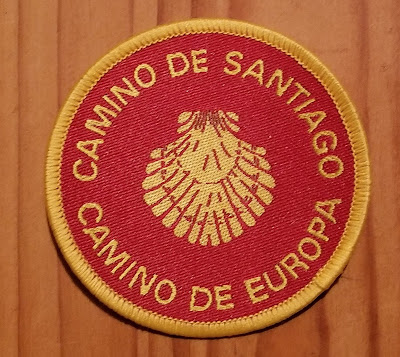 While this network of varying routes has historically existed since the 12th century, it has recently begun to grow and transform once again amid renewed popularity and tourism. The differences in this network of routes are best defined by their differing distances, geographies, landscapes, challenges, and in terms of the infrastructure directly established for the benefits of pilgrims as well as the frequency of trail markings.

It should also be noted that while the pilgrimage to Santiago Spain has traditionally been one undertaken for spiritual and religious purposes, it is a trail for anyone, of any nationality, faith, belief, orientation, age, or skill level.  In the modern context, the majority of persons claim to hike for cultural rather than religious reasons.  Similarly, the average age of pilgrims is over 35 years with an increasingly large portion of hose being over 50.  In addition, people with nationalities from all over the world trek the Camino annually with the list of countries represented constantly growing.

And so in the modern context, increasingly even for the non-religious, the momentum of walking, the time in the fresh air amid a beautiful country, the variety of individuals you meet, and the experiences one has on the route make the Camino a personally life changing undertaking.... 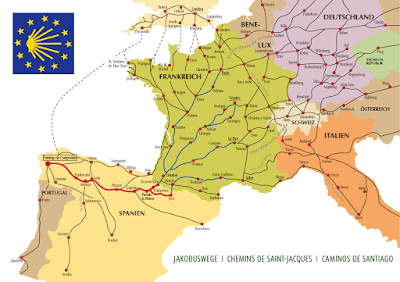 The Camino Frances, or the French Way, otherwise typically referred to as the Camino de Santiago and viewed as the traditionally route of pilgrimage – was established in the 12th century and famously first referred to in the Codex Calixtinus a period text. Historically, Camino routes throughout Europe followed along old Roman and Medieval Roads which were usually established for trade over the centuries. 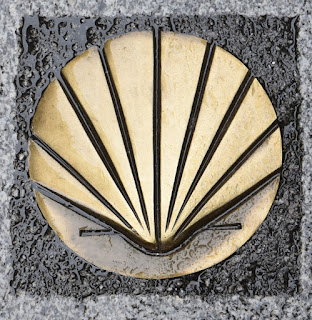 Regardless of their original purpose, the pathways were soon utilized by religious pilgrims to sites of particular importance such as the Cathedral of Santiago in Spain, the Vatican in Rome, and in Jerusalem. According to tradition, the Cathedral in Spain is the final resting place for the remains of St. James, and disciple of Jesus.  The tale of St. James – as a one of Jesus’ first disciples, who was later rebuked for Jesus by striving to advance himself, and was considered hot tempered – is complex.  Regardless, it is known that he was sent to preach in Iberia, where he attracted only a few followers and where he would later become the region’s patron saint.   Ultimately James would be the first apostle martyred in Jerusalem by Herod, after which, according to legend his body was transported unaided on a stone boat to the coast of Spain where disciples gathered his remains and buried them.   As a result, St. James would remain largely forgotten until 813, when his remains were located by a hermit who claimed that he was lead to the grave site by a divine light.  The discovered body was later confirmed by church officials to be those of St. James and soon afterwards the construction of the Cathedral was undertaken.  Around this period, James’ legacy is made more complex by reports that his likeness appeared during a battle between Christian forces and a Muslim army.   Though the tradition of Santiago Matamoros, is now considered to have been created by local officials and the church to infer God’s advocacy for and the continued financial support of the Crusades and Re-conquest of the region throughout the period.  Regardless, from this period onward the image of Santiago would take on several representations ranging from the penitent and humble pilgrim with a cloak and staff, to the raging ‘Moor killer’ with sword in hand on a white horse. 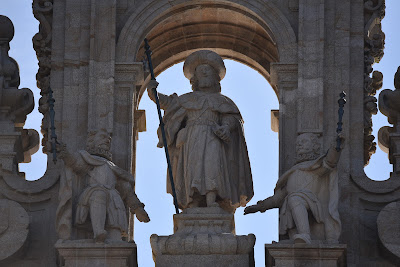 Despite such complexities in the Biblical , cultural and historical accounts of St. James and in the presentation of him as a defender of the faith and Spain on a white horse, the popularity of both him and pilgrimage to Santiago grew throughout the 11th and 12th centuries. As a result, throughout this period churches, monasteries, and locals began the tradition of hosting, protecting and aiding pilgrims.  In turn Santiago de Compostela was considered one of the major sites of pilgrimage throughout the Christian world.

For centuries, Individuals from around Europe undertook pilgrimage for a number of reasons: to seek forgiveness, as an active of penitence, to receive a blessing, to pray for healing or aid, or their own personal purposes.  Pilgrimages were undertaken at the behest of a priest or bishop, where legal sentences for criminals, or where undertaken by the affluent to demonstrate their piety.  Regardless, with increasing numbers of people trekking to Santiago so too soon arose the traditional symbols of the pilgrimage including the walking staff, water gourd, the wide brimmed hat, the shell, and the backpack. 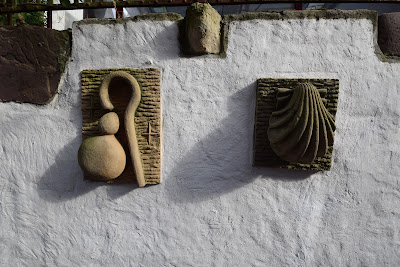 Though its precise meaning is uncertain, one symbol in particular, namely the scallop shell has become the primary image associated with the Camino. Even today the debate is ongoing, whether the shell reflects St. James’ time as a fisherman, whether it symbolizes the many routes to Santiago, whether it reflects the notion that while we each take a different path, ultimately we all reach the same destination, or whether it serves as the original arrow marker directing pilgrims to the shores of Spain.  Each theory has its advocates and defenders. 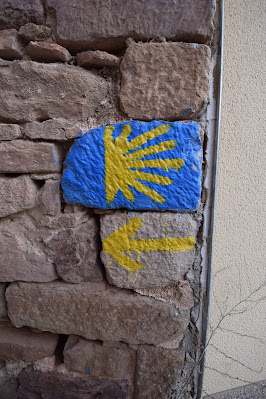 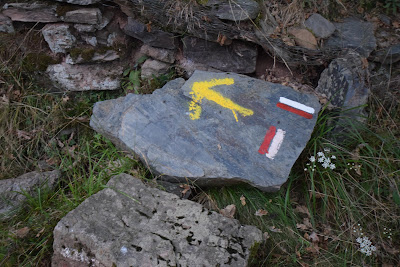 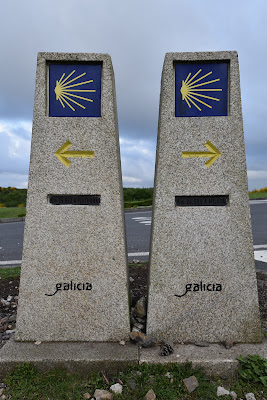 Each route is distinguished by particular religious relics, holy sites, churches of importance and varying cultures.  Throughout the centuries since the founding of the Cathedral of Santiago, the Camino has risen and fallen in importance and popularity.  It has been travelled by devoted pilgrims, penitent criminals, merchants, cultural tourists, and adventure seekers.  Most recently throughout the 20th century the Camino has again risen in notoriety– since the 1950s and increasingly since the late 1990s.  At the same time, increasing development by the European Union along several of the Camino routes, and recognition of the Camino by UNESCO has in turn also severed to increase The Way’s accessibility and popularity.  In addition the recent publication of a series of popular books and pilgrim accounts such as Paulo Coelho’s “The Pilgrimage”, Jack Hitt’s “Off the Road: A Modern-Day Walk Down the Pilgrim’s Route into Spain”, Hape Kerkeling’s “I’m off Then: Losing and Finding Myself on the Camino de Santiago”, and Jane Christmas’s ‘What the Psychic Told the Pilgrim”  as well as movies such as Martin’s Sheen’s iconic “The Way” and the recent documentary “I’ll Push You” by Patrick Gray and Justin Skeesuck have only strengthened the notoriety of these paths. 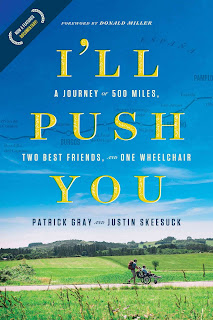 As a result of such increasing world wide popularity, a common debate in communities and albergues along the route is whether many are pilgrims or tourists.  Regardless, of an individual’s intentions upon undertaking the Camino however, it is in the journey and not the destination that The Way holds its appeal amid these modern times.

The Credential
The Credential, or pilgrim passport, is a small booklet carried by pilgrims on any Camino route, that identifies them as pilgrims on the Way of St. James, gives them access to alburges  and which is later inspected to ascertain the distance they have traveled. 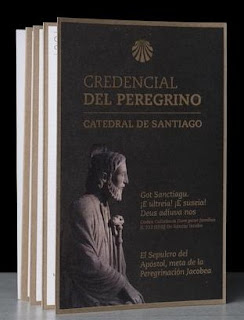 As such, it identifies the bearer as a pilgrim and provides proof that you have traversed day by day along a particular route.  Having a pilgrim passport, allows you to sleep in albergues, and may in some locations grant you special rates.   Travelers are required to get at least 1 stamp, or sellos, or carimbos per day prior to the final 100 km where you are required to get at least 2 per day – available in albergues, hostels, hotels, post offices, train stations, municipal offices, churches, and cathedrals. 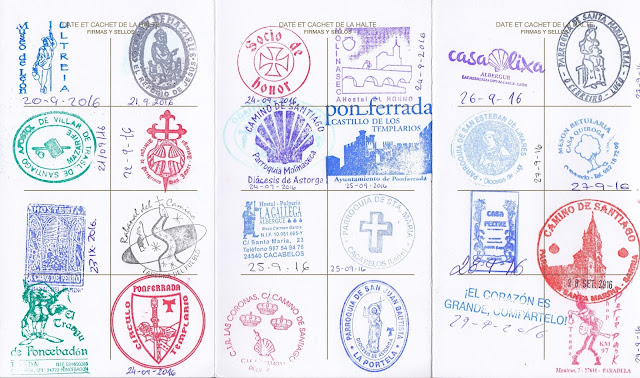 In St. Jean-Pied-de-Port the Credential is picked up at the pilgrim office, however on other routes such as the GR65 you can purchase on in the Cathedral in Le Puy, or in Lisbon you can get your passport at the Se Cathedral.

If you traverse all the way to Santiago, it s likely that your final stamp will be from the Cathedral or the nearby Pilgrim Office.  After which you are able to confirm that you have trekked at least 100 km to Santiago and receive your Compostella. 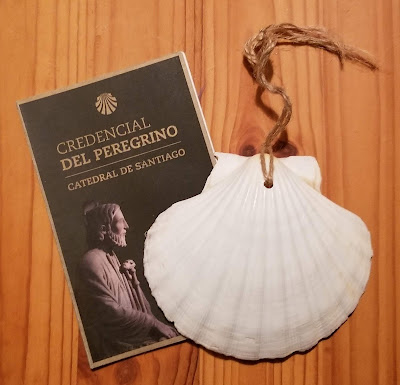 The Compostella, is a document issued at the Pilgrim Office in Santiago, and is granted to pilgrims after arriving in Santiago and asserts that they have trekked at least 100 km on foot to the Cathedral.  Note however that in recent years this distance has come under reconsideration and is likely to soon be increased and the required distances vary according to one’s mode of arrival (ex- bike, horse).  To receive your Compostela, pilgrims must present their personalized Credential with at least 2 stamps per day for the last 100 km hiked, and at least 1 stamp per day for all kilometers trekked before that.  The Compostella received will note how far each pilgrim traveled and along which route they arrived. 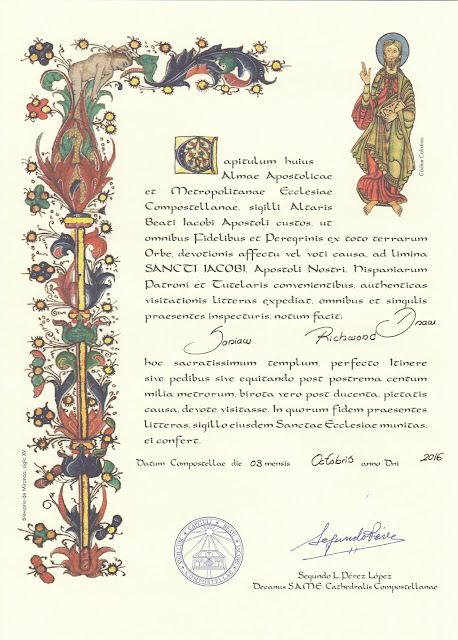 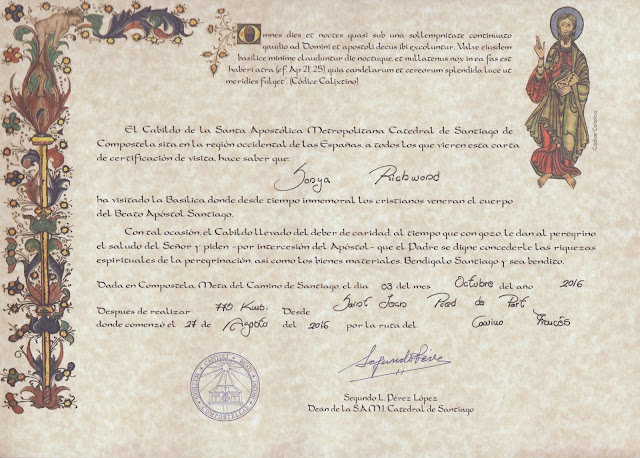