We awoke this morning to the sound of birds singing in the fruit trees outside our open window. Outside the sun was just beginning to burn the mist off the surrounding fields and vineyards.

We headed downstairs for a bountiful breakfast of orange juice, toast and homemade marmalade, and soft boiled eggs. Conversation was lively, and the generosity of Paula was incredible to the end. 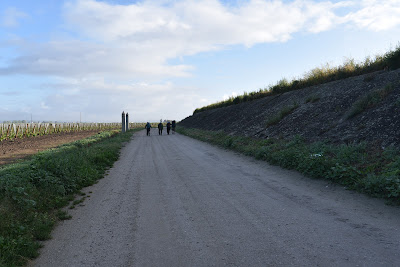 Around 8 am we said goodbye at the gate, and headed out down the diet track towards Santarem. The morning passed very pleasantly as we walked down country lanes, serenaded by the loud and varied songs of birds in the hedgerows. We were surprised to find a small flock of egrets in among the vines, presumably feasting in the plentiful and large snails that were still out after yesterday's rain. 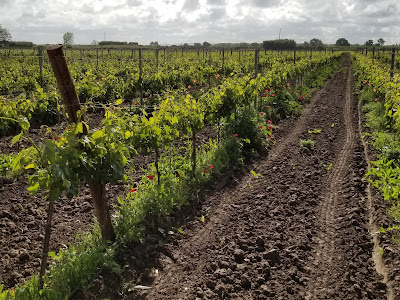 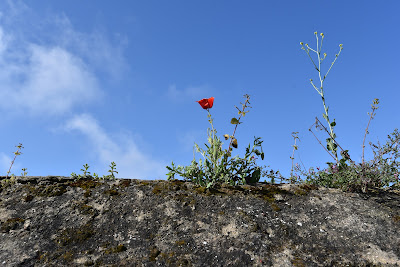 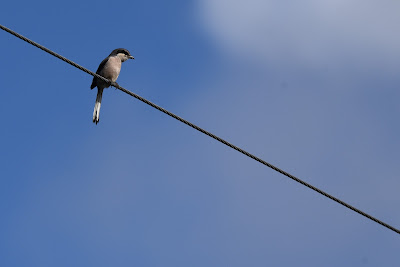 Just as we reached the end of the dirt track, where our path turned towards Santarem on a paved road, a single cloud decided to rain on us. Luckily we were just approaching an overpass, where, in the nest tradition of hobbits, we paused to enjoy our elevenses of toast and marmalade while we waited out the rain. 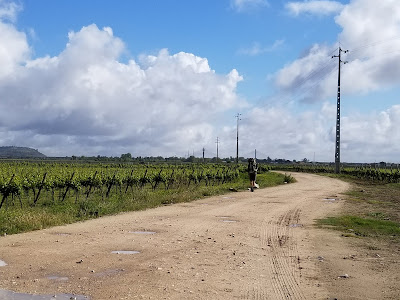 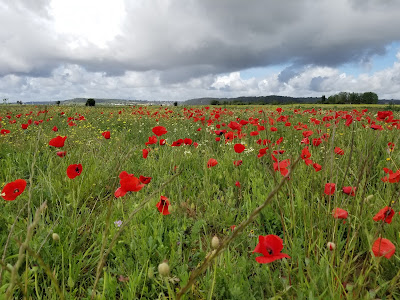 There followed a stretch of tree-lined, paved road, with little traffic, that offered views of Santarem up on top of the hill.

Just before we began climbing the steep road into town we ran into Fernando and another pilgrim we've been walking with, and they directed us into a small somewhat hidden cafe. It had all the charm of a tiled, wisteria covered courtyard, and a colorful bar inside with many photos and hand drawn pictures of matadors. While we were enjoying a coffee in the dark oasis inside an English pilgrim walked in and joined us in conversation. 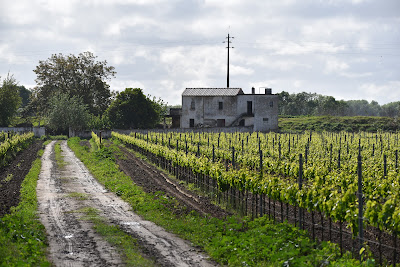 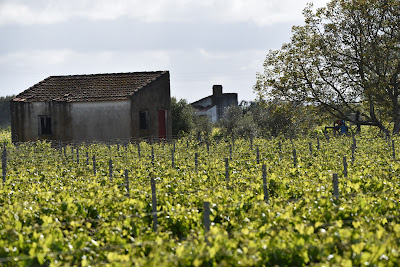 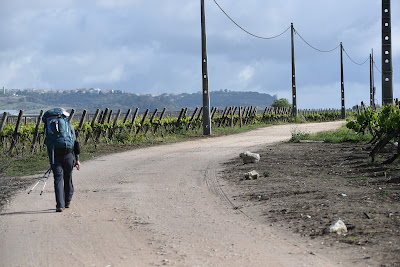 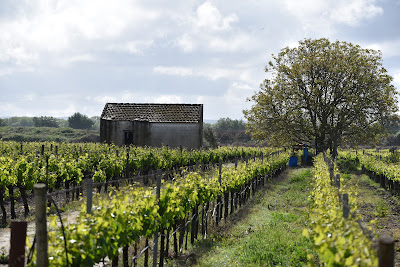 After a nice break we started up the steep road, which offered beautiful views of a treed valley dotted with red roofs, nice gardens, a goat, and an old fountain. Although the road was steep there was little traffic, and the climb wasn't too long. 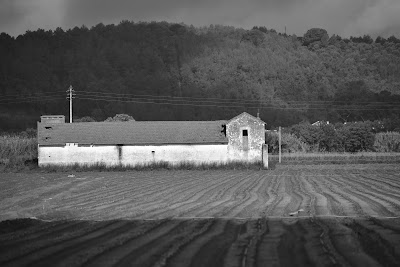 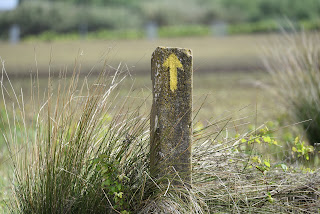 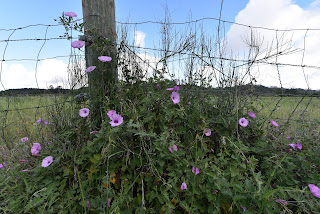 At the tip of the hill we emerged in a nice looking town with an interesting mixture of old and new. As we walked down the busy, white tiled sidewalks we passed Sue and Peter sitting at a cafe. We continued on to the Hostel Santarem, and were allowed to check in, even though was still early.

Shortly after settling into our room the heavens opened up and it began to pour! Good timing once again! We headed out to the Supermarket for some granola bars and cookies for the upcoming days, which was in a very modern looking mall. After that we found a small cafe and had two very nice sandes com quiejo (sandwiches with cheese), and then headed over to the laundromat to wash and dry our clothes, which have been wet for a couple of days by now. As we waited for the laundry to finish the sun came out again.

After chores were done we walked through the cobblestone streets to the Portas do Sol, which is a very well maintained park, surrounded by an old wall, with a view over the Tejo River valley. We walked the walls, enjoying the view, and wandered over to take a look at the Roman ruins, which turned out to be a partially excavated settlement covered by a roof. 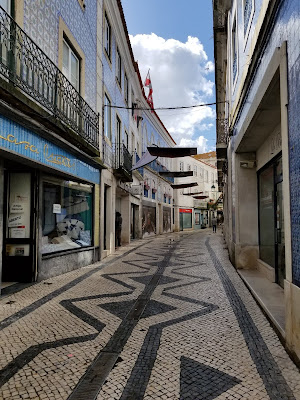 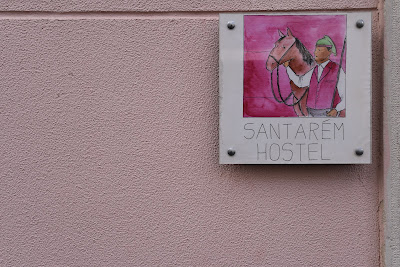 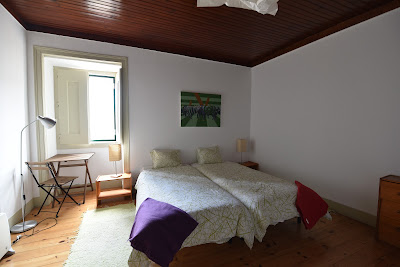 After exploring the garden, we wandered the town, finding the cathedral and several churches, and generally getting ourselves lost in the beautiful, winding, cobblestone streets. 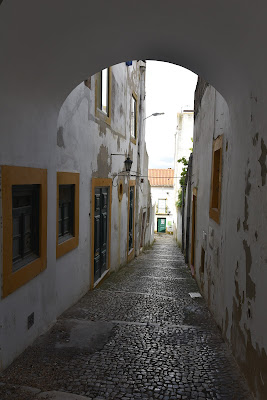 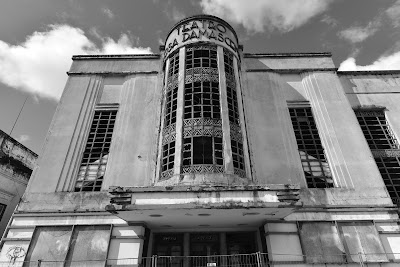 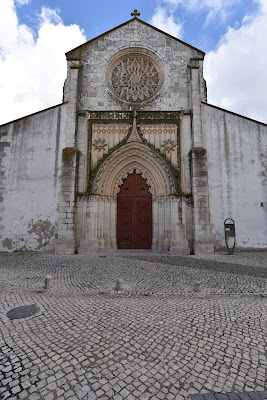 Eventually we ventured enough to find the Porta du Sol giving us a wonderful view of the nearby valley. 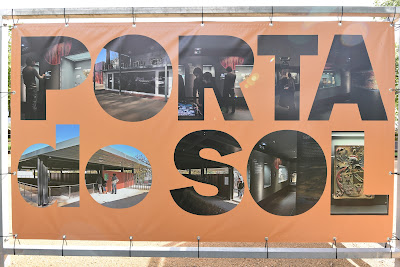 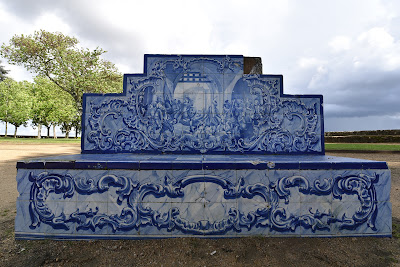 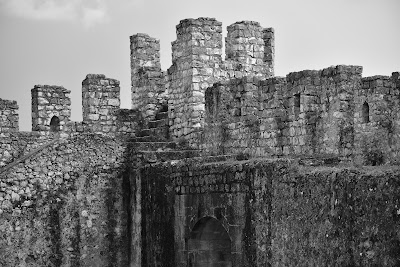 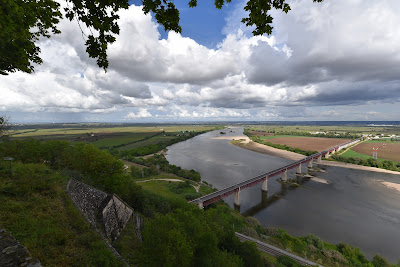 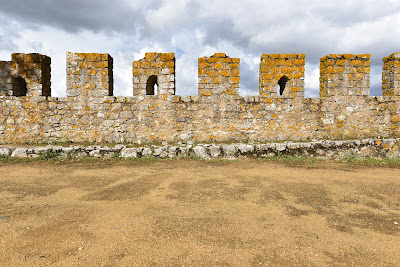 We returned to the hostel for a short break, and then headed out in search of dinner. Most eateries seemed to be inexplicable closed, either because today was Good Friday, or because we were too early. 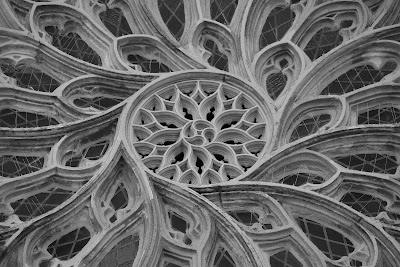 We e eventually settled on a British pub, mostly because it was open. We had a couple of pints, and asked for a plate of nachos. We were imagining the North American version of this dish - a pile of corn chips, covered in onions, peppers, tomatoes, olives, and cheese. What appeared was a plate of Doritos with microwaved cheese sauce. I guess you win some and you lose some. 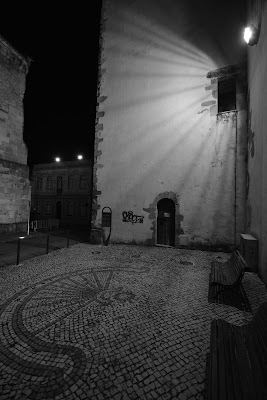 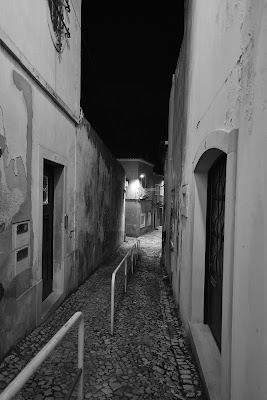 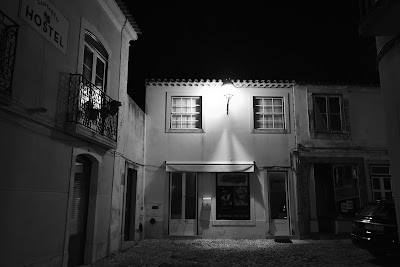 Walking home in the dark was very beautiful, with the cathedral and streets lit up. Just as we got back to the hostel the power went out. It was time for bed. 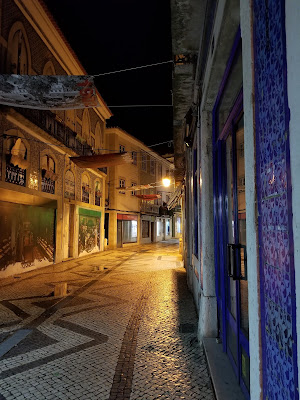